the OCSB voted on a new policy/procedure last night. The Ont govt ordered all boards to have it done by Nov 30th.

Firstly, they lazily put the comment date to be Nov 26th 5pm for a new policy to be voted on at 7pm the same day.. they were non-chalant about it when informed that the date must be wrong. https://www.ocsb.ca/policies/  They never even published the proposed new policy

Now, they are making it hard for parents to get exemption. The provincial rules talk about having a policy to inform parents about a form they can use. They even give a sample form

The OCSB process talks ZERO about informing parents about a form. Instead, parents need to write out a request. The OCSB took PPM162 and basically deleted all references to the easy-to-fill-in Form in order to make it harder for parents to get an exemption!! Such disrepect for parents!!

why does OCDSB do it right and not OCSB? Less respect for parents and the law?

The HCDSB has an even more ridiculous process (Appendix B): https://www.hcdsb.org/Board/Meeting%20Documents/Policy_2019_09_10_Report.pdf

This is an example of a Board who actually wants to comply with PPM 162:

another good one: Renfrew Catholic 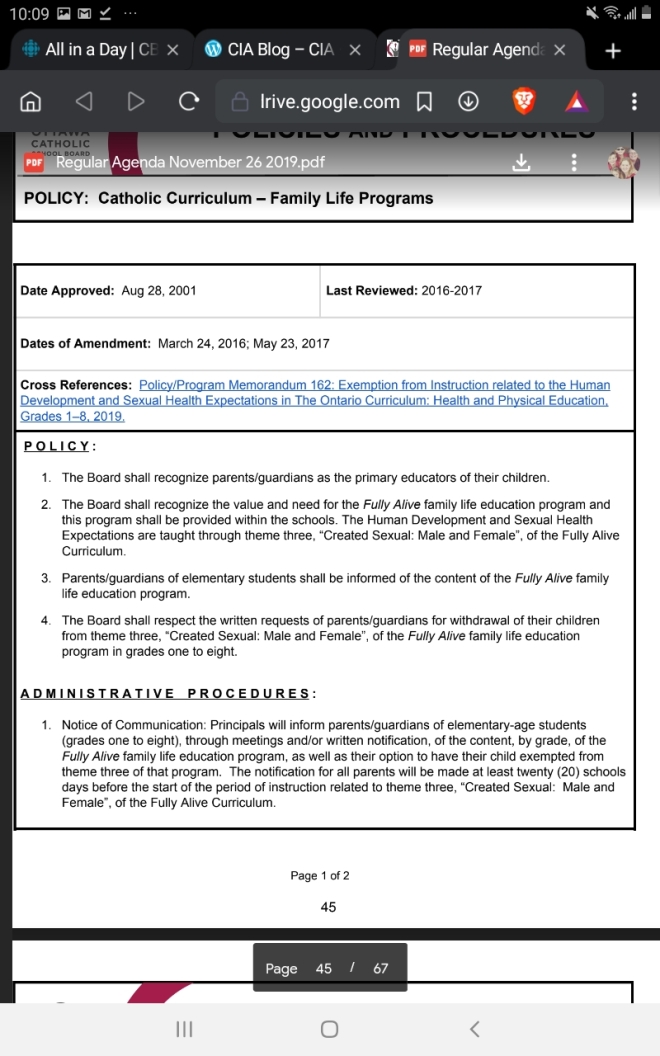 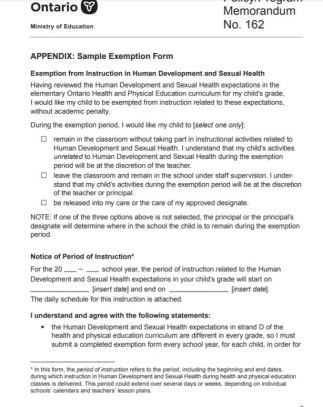 UPDATE: Amazing and encouraging comment from a reader about a US independent Catholic school:

I am the mother of a child who decided she was non-binary and wanted to dress in androgynous clothes and asked people at school to call her by a gender nonspecific name. I am incredibly grateful that she attends a Catholic HS and when we found out about this we went to administration and a text was sent out to all of her teachers informing them that she was to only be called by her given name and called by female pronouns. A few of the teachers at school had allowed her to sign her “new” name in any communication they had with her. The school also implemented some other checks and controls, as we did at home, to keep her from getting any positive feedback about her trans-positive inclinations. Over several months she began to move back towards a more feminine style of dress and dropped the extreme image she was attempting to create. My daughter has suffered from anxiety and depression since 8th grade and also has ADHD. She has always been a different kid that found it hard to fit in. That the school did not give into her confusion is worth every penny I have ever paid for Catholic school tuition. With a new Catholic therapist and many open conversations between her, her dad, and myself she has realigned her self image with her biological reality. People continue to say how kind and loving and Christian it is to support young people (in this case a 15 year old girl with a history of mental health issues) by using their preferred pronouns and new names and self professed gender identity. But when it is your child you may feel very different about that. I think it was kind and brave of the school to uphold the truth of her femaleness and not cower and misgender her as a boy, or as a nothing. She was not able to see the truth so we her parents and the administration of the school showed her the truth. That is the Christ-like thing to do.

What does OCSB do?? Have talks by kids praising “chest binding” and taking hormones!

Are there are any research papers on limbic syncronization? Nope. Anything on Google Scholar? Nope. 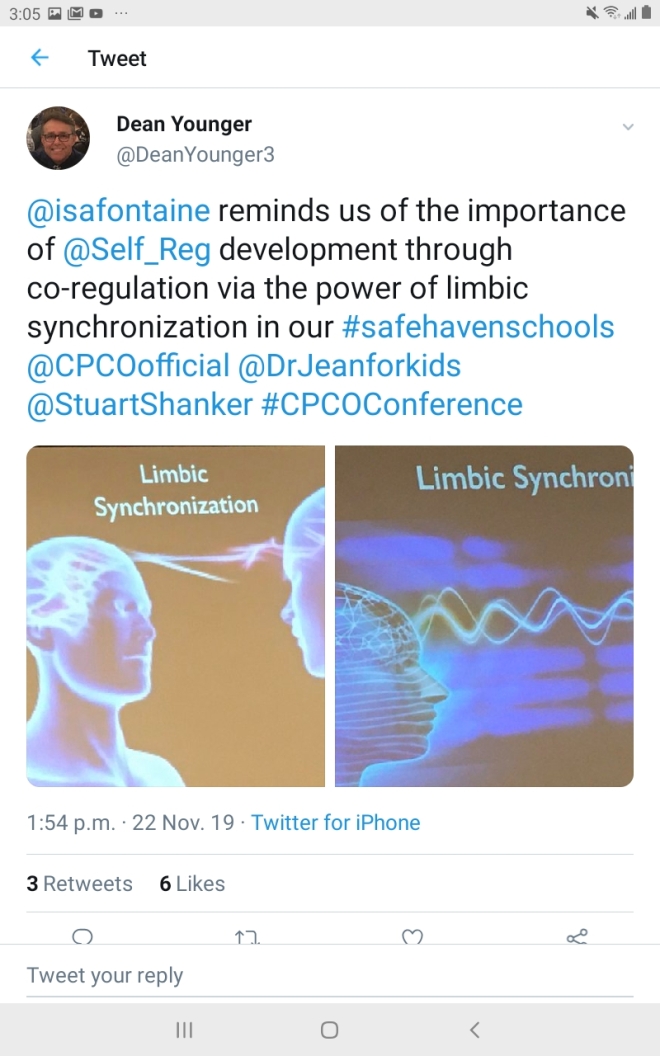 ==
Other:
https://cebi.org.br/produto/escutar-o-divino-que-emana-da-amazonia/
https://www.mercyworld.org/f/45074/x/efb2f166ba/sheila-curranrsm-the-special-synod-on-the-amazon-september-2019pdf.pdf
Gustavo Gutiérrez, Leonardo Boff, Jon Sobrino, Ivone Gebara, Maria
Clara Bingemer and Elza Tamez, to name a few.
The Ecofeminism of Ivone Gebara:
https://open.uct.ac.za/bitstream/handle/11427/9306/thesis_hum_2014_nogueiragodsey_e.pdf?sequence=1
On another occasion, Gebara (2005a: 119-120) visited a mãe-de-santo do Candomblé.
Candomblé is a hybrid between Christianity and black-African religious traditions that were brought to Latin America with the slaves during the colonization. In the Candomblé tradition women are religious leaders, known as mãe-de-santo, “mother of saints”. These women are seen as holders of great power due to their ability to contact the spiritual world, which is interlinked with the natural world.50 Traditionally, Candomblé was prejudiced by Christianity and generally condemned as pagan/satanic by most Catholic priests and Evangelical pastors. Gebara described her mixed feelings during this visit and a type of apprehension or fear of the unknown. The room in which she waited to see the mãe-de-santo was filled with different altars, colourful candles,
incense, different images of divinities, offerings from rituals—nothing that reminded Gebara of a  Catholic church. Gebara told the mãe-de-santo that she would like to know who her guides or protectors were within Candomblé. The mãe-de-santo consequently performed a ritual that began by throwing shells, at the end it was revealed that Iemanjá was Gebara’s protector. Iemanjá is believed to be the goddess of the oceans, the very essence of the water protecting all the mothers and children. The second protector was Iansã. Iansã is a warrior goddess, full of happiness, who likes gold. The religious pluralism in the pernambucano context challenged Gebara to reflect on the religious experiences of those from different traditions. Her meeting with mãe-de-santo was a singular experience that triggered questions about the symbolic representations of the divine and how many of Christianity’s expressions of God that were based on men’s experiences.

We have written before about how Bishops and priests in western South America have done things like “Pago a la tierra” and Pachamama (Peru, Chile, Ecuador etc)

But there are huge syncretism issues in the Church in Brazil (particulary in areas like Bahia) and  parts of Uruguay and Argentina.

Candomble and Umbanda are both syncretic religions based on Afro-Brazil Spiritism and Catholicism. Many Catholics practice both Catholicism and a spiritist religion. Bishops and priests go along with it or even join in!

Umbanda has many gods and goddesses (orixas) who are hidden by various Catholic saints (Mary, Benedict, Cosmas and Damian etc). For example,  Yemanjá is the sea goddes behind Our Lady of the Seas. Oxum is Our Lady of Apericida.

There are not many pure Candombles or Umbandans, but many Catholics practice parts of them!

Catholics will go to BOTH celebrations! ” a great number of Catholics would have some belief in, if not fear of, Candomble spirits and practices. These Catholics practice what is called dulpa pertença or “double belonging”.”

Bishop Keller spoke strongly against these errors, but many other bishops seem to go along. Is this what we want for a future for the global Church?

Why are African bishops and Cardinals so good (Cdls Sarah and Arinze) and in the South America they push liberation and syncretism??

The following few screens are unorganized videos, links, and screenshots to give you an idea of the HUGE issue in Brazil. We hope someone can write a good article about this. Use google translate within Chrome broswer (right click on webpage).

Watch the following from 26min onwards:

https://www.instagram.com/p/B5EVHT4g4lB/ Priest kneeling for a Umbanda priestess (Mother of Saint)
===
https://america.cgtn.com/2019/03/16/dual-religions-how-afro-brazilians-maintain-their-spiritual-roots
Pro:
https://columbanird.org/interreligious-dialogue-with-candomble/
Critical:
http://www.ncregister.com/blog/edward-pentin/amazon
Critical:
https://traditioninaction.org/RevolutionPhotos/A826-Voodoo.htm
Pro:
http://www.diversidadreligiosa.com.ar/blog/dia-de-iemanja-en-san-clemente-ofrendando-a-la-gran-madre-que-nos-une/
===
Pro:
The ritual of the washing the steps of La Madeleine carried out in the Yoruba language was officiated by a Catholic priest and a pai de santo (Candomblé priest)


===
https://elpais.com/internacional/2017/02/02/actualidad/1486056922_615284.html
I believe that I have understood something of the old African religions that are practiced in Brazil when, in another Terreiro of Umbanda, also at the foot of the beach, protected from the sun by a giant umbrella, a Catholic bishop with miter celebrates a mass before a sculpture of Yemanjá and other Orixás . Pray an Orthodox Our Father and I feel that I have returned to the starting point, that I still don’t understand anything.
==
In Pelotas, Rio Grande do Sul State, on February 2, the image of Nossa Senhora dos Navegantes (Our Lady) is carried to the port of Pelotas. Before the closing of the Catholic feast, the boats stop and host the Umbanda followers that carry the image of Iemanjá, in a syncretic meeting that is watched by thousand of people on the shore.
===
Critical analysis from Eastern Orthodox
http://www.orthodoxchristianity.net/forum/index.php/topic,72424.0/all.html?PHPSESSID=6a39dbacdc0eab0e847bf1c6aaa9e49d
===
https://es.aleteia.org/2016/02/02/iemanja-y-umbanda-diosa-del-mar-o-virgen-maria/
===
https://www.patheos.com/blogs/theglobalcatholicreview/2019/07/brazils-black-sister-queens-oxum-and-our-lady-of-aparecida/
==
https://g1.globo.com/ba/bahia/noticia/2019/08/13/irmandade-da-boa-morte-g1-conta-historia-da-festa-secular-do-reconcavo-que-resiste-ao-tempo.ghtml?fbclid=IwAR2X2RjqMUireT0Mb1zLq1jkFdvkPWRkiGSgxRXkh5zt70QRGX0P9yQzhcQ
===
https://www.facebook.com/pg/catolicosdaamazonia/posts/
==
Repam is pro. Imporant Read!
http://repam.org.br/?p=2765
===
Fanciscans are pro!
https://franciscanos.org.br/noticias/o-mundo-religioso-novo-livro-de-frei-volney.html
==
Pro:
https://www.rainhamaria.com.br/Pagina/23945/Sinodo-da-Amazonia-Bispo-de-Manaus-se-une-a-babalorixa-do-candomble-para-construir-uma-agenda-inter-religiosa-a-nova-igreja-de-Francisco-todas-religioes-conduzem-a-Deus-e-ao-Ceu-
Critical:
https://www.catholic.com/magazine/online-edition/idol-threats
Critical Analyses
https://cleofas.com.br//?s=Candomble
===
Santo Daime is a small Amazon offshoot that uses Ayahuasca drug/Ubanda/Catholic
http://santodaime.ca/fr/mediumnite/
Mediumship and canalization are processes of Spiritism, a process of form and expression on the physical plane of disembodied entities, energies, beings or intelligence. Mediumship and channeling can manifest differently from person to person.

This range of events can include both artistic expression on a daily basis and the incorporation of a spiritual guide as part of a sacred ritual. In Eastern philosophies, the supreme form of incorporation and manifestation is found in service, “compassion in action,” while Love and the Light of the Divine Heart are revealed in the daily life of an individual. In the Santo Daime doctrine, mediumship is rooted in both Amazonian shamanism, the Umbanda tradition, and spiritualism, and includes the incorporation of specific beings and entities for the purpose of teaching and healing.
https://santodaime.com/en/asks/
====
Santo Daime in Ireland
https://www.irishtimes.com/life-and-style/health-family/psychedelic-drugs-magic-or-menace-1.3762650 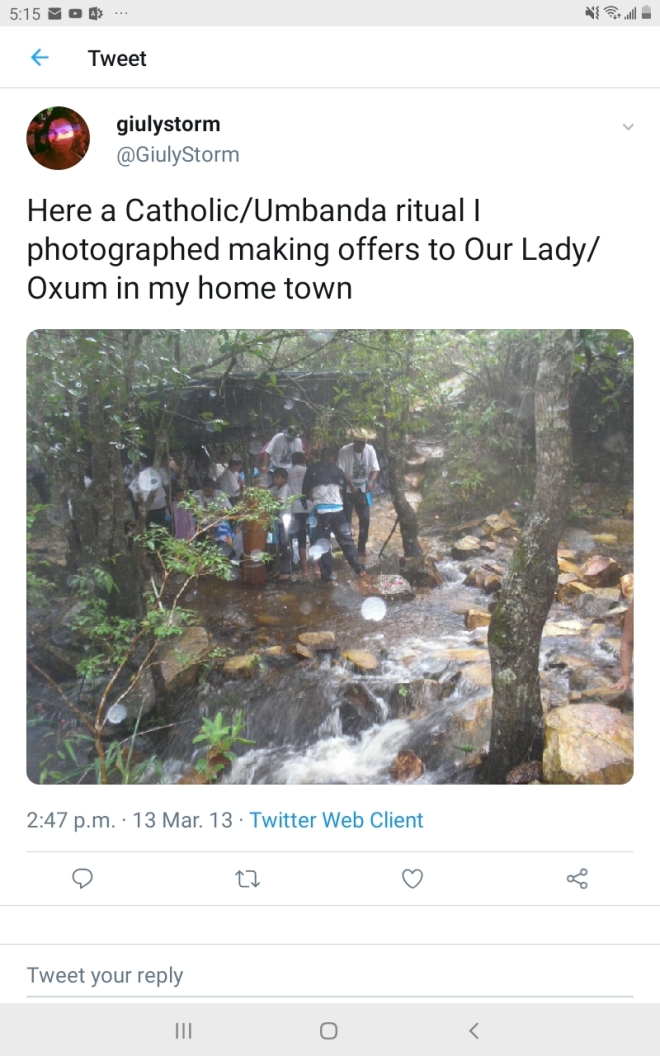 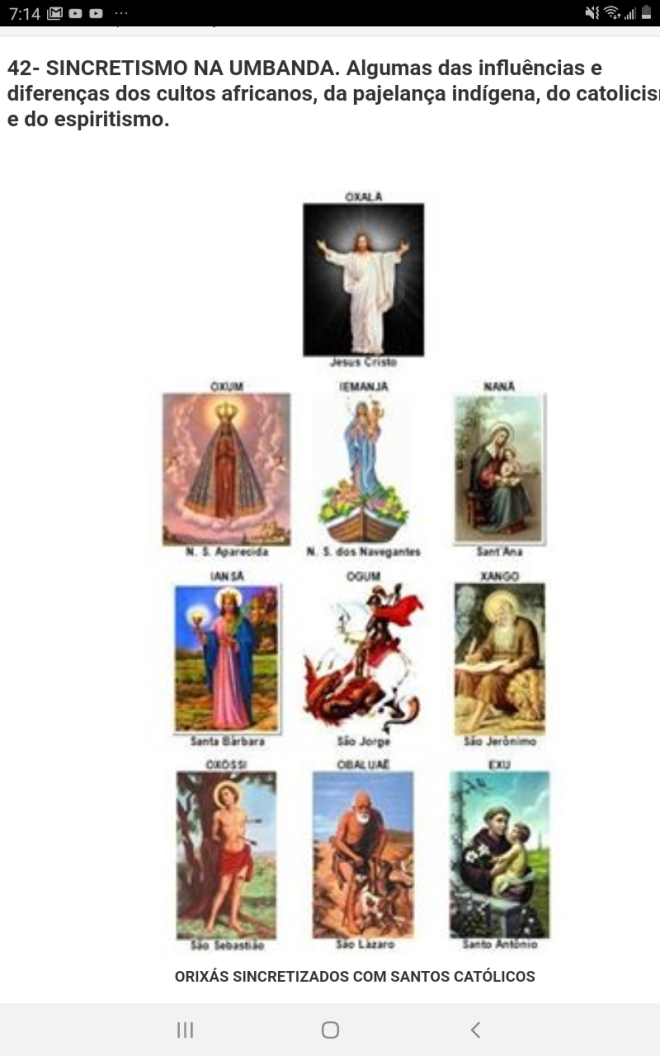 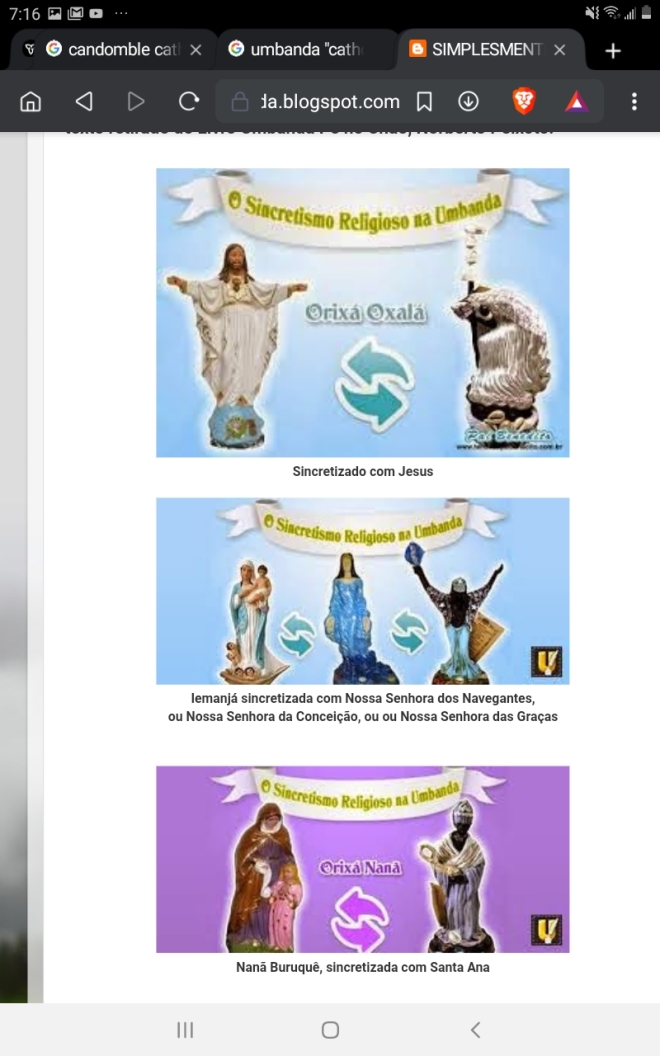 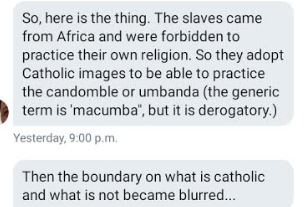 Loyola Jesuit U… Students asking for advice from “spirits” 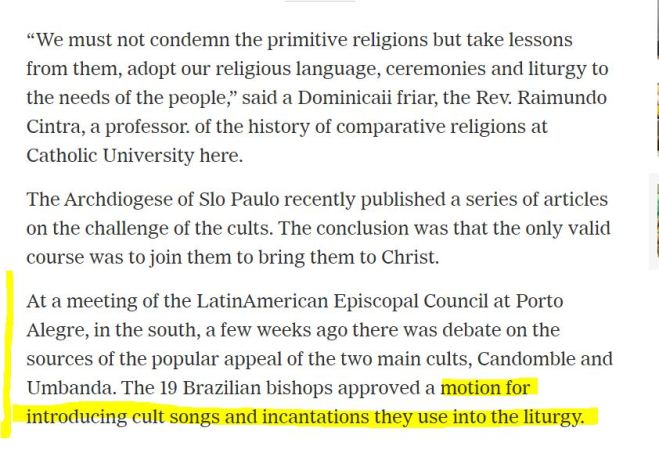 a rare awesome Brazil bishop:
Bishop Azcona referred to a meeting held in Brasilia by the REPAM [Pan-Amazonian Ecclesial Network], before the Synod, last June, during which several “indigenous rituals with invocations and prayers, to which some bishops also participated” took place. Then he mentioned the ceremony held at the Vatican.

“These are fundamental questions and here in the Amazon we know the meaning of Macumba or Candomblé, magical rites and curses from northeastern Brazil and the state of Bahia, which are common here, 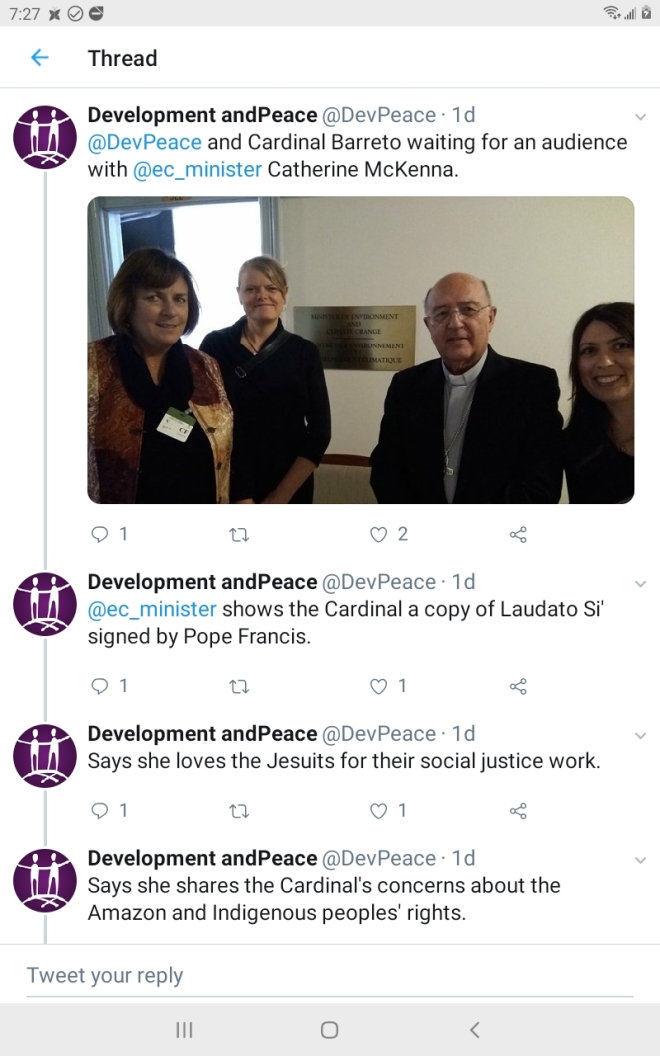 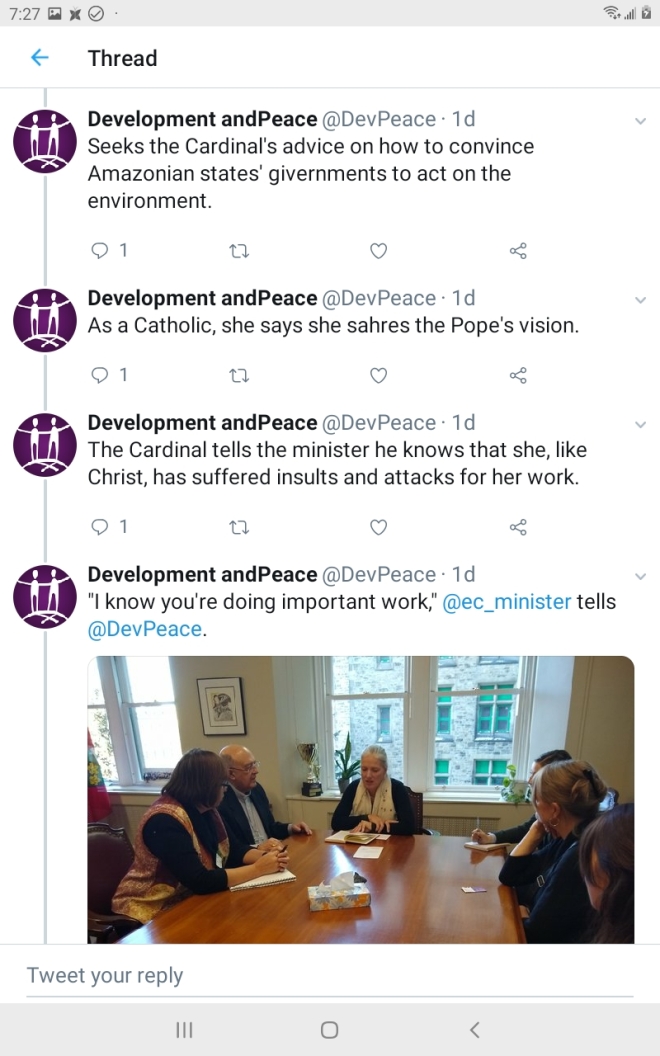 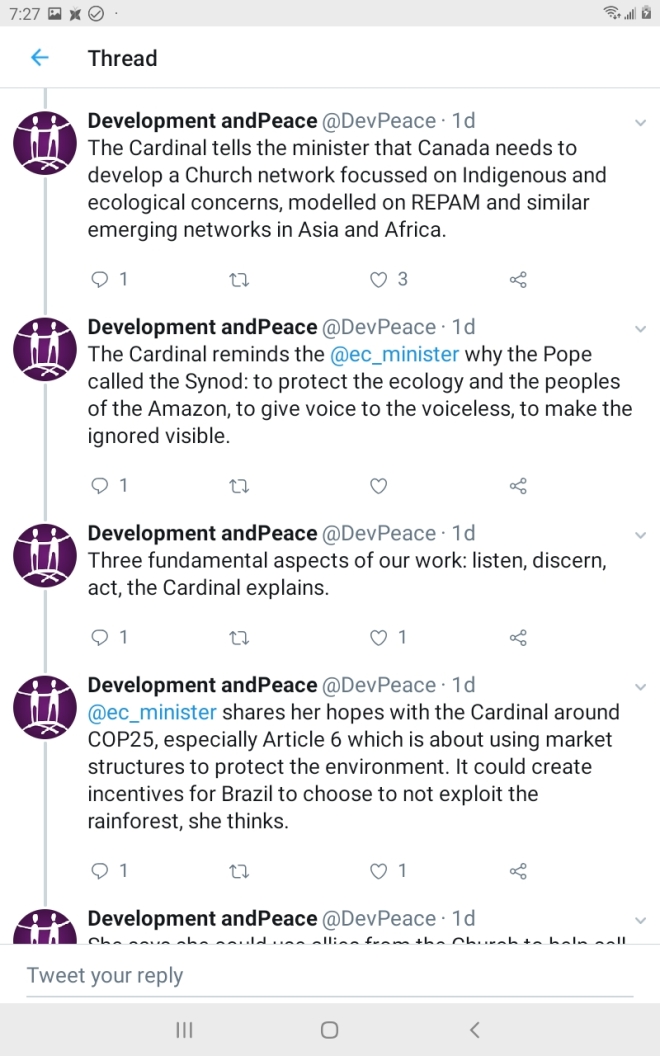 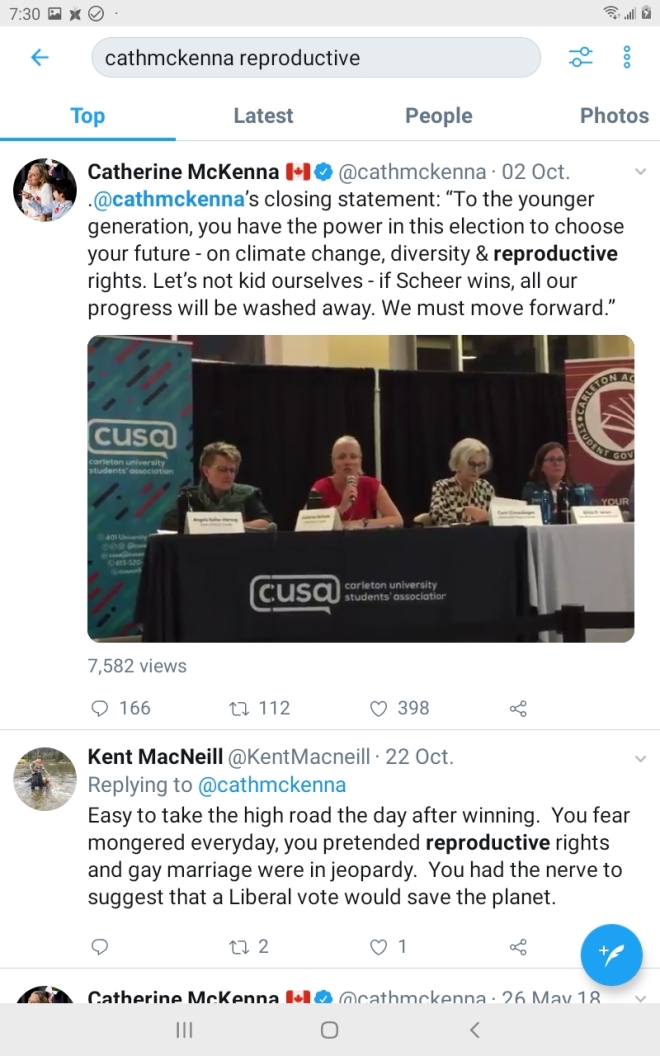 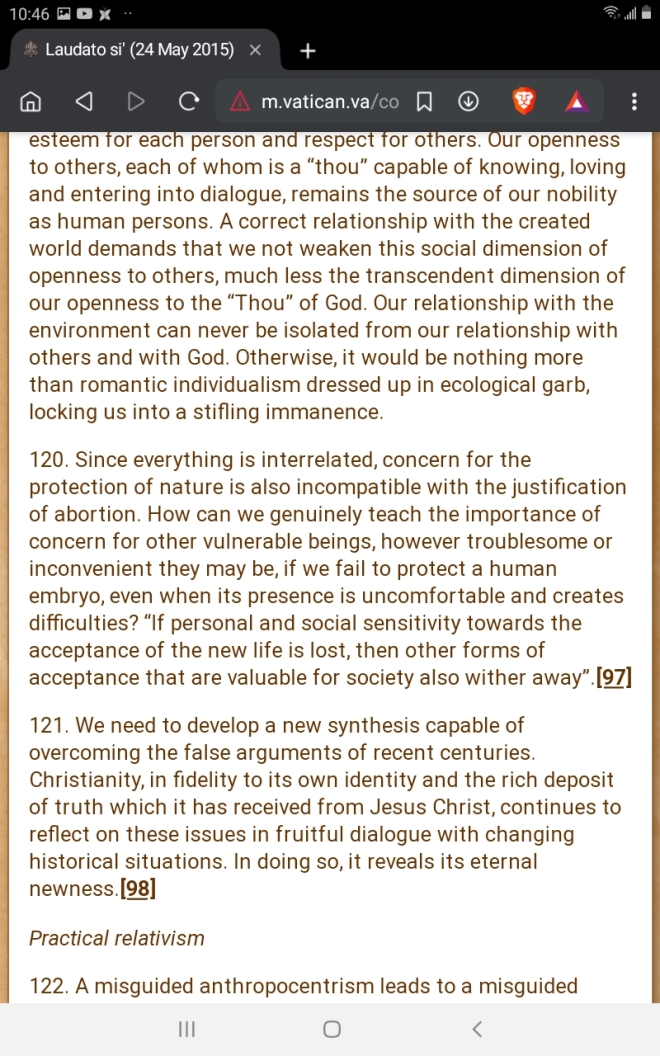 The whole world is talking about the following radical sex ed video series. Even Bishop Strickland of Texas took to twitter about it. A little known fact is that it is made in TORONTO!  Toronto is a world-leading hotbed for radical sex ed material and trans activism.

We know that people get BLOCKED by TCDSB trustees for politely asking on twitter whether Church teachings on Transgender are hateful:

@My_sexed is just as radical as SexEdSchool. She teaches future TCDSB teachers at OISE in Toronto.

Here is another trustee reassuring her that her agenda is fine. 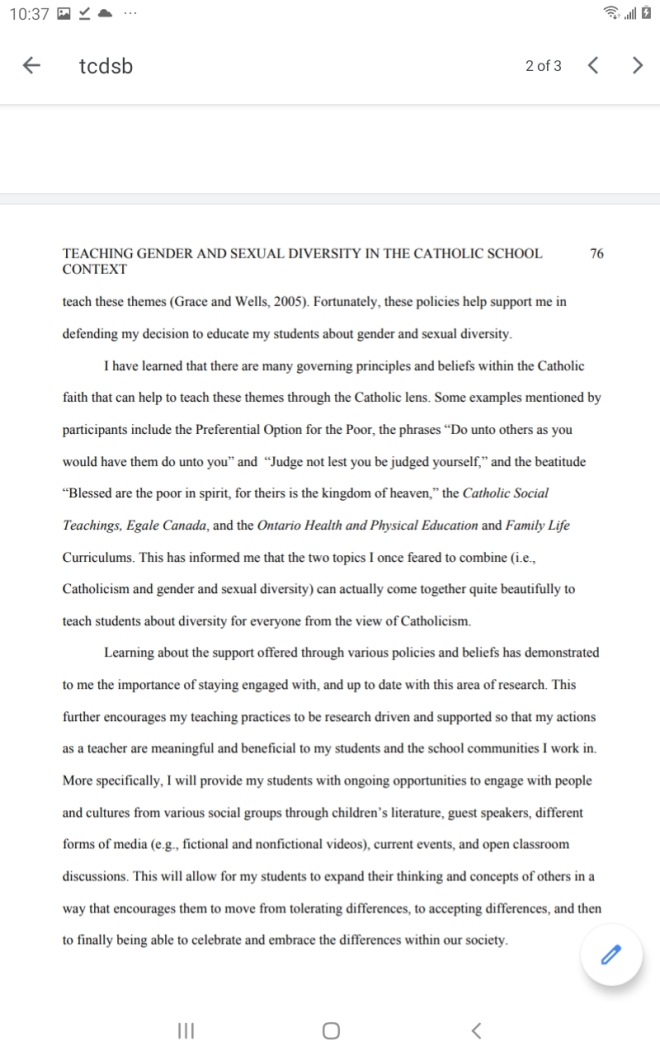 TCDSB will get raises paid by taxpayers for taking this course: