More proof that taking your children out of a couple afternoon’s of sex ed is not enough. The “EIE” LGBT curriculum is spread across all courses (English, Social Studies, math, science, etc etc)

A senior #OCSB teacher has tweeted these resources for Grade TWO Social Studies. In fact, it is based on a LGBT book on diverse families:

It is all based on The Family Book by Todd Parr 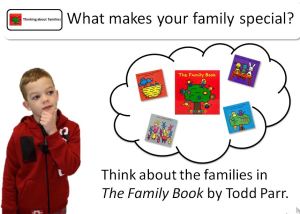 PS: I note that diversity doesn’t extend to polygamous Muslim families that exist in Ottawa. These are defacto not de jure. One has a legal marriage with one wife and quiet religious marriages with the other wives. Apparently they are based on love too, just not politically correct like gay “marriages”

PPS: OCSB is an official partner of the TC2 consortium:

PPPS: The law of gay “marriage” says this:

WHEREAS everyone has the freedom of conscience and religion under section 2 of the Canadian Charter of Rights and Freedoms;

WHEREAS it is not against the public interest to hold and publicly express diverse views on marriage;

Why won’t OCSB express the CATHOLIC view of marriage??!! ONE MAN- ONE WOMAN ONLY!

Update: This blog is certainly no fan of US Common Core and doesn’t think it can be made “Catholic-compatible” in any way. But even the CCCII has stopped the use of “The Family”